Victims report receiving an email from a company they normally deal with, asking them to change their billing account numbers to reflect the company’s new account.  The email appears to be one they have corresponded with before, but upon further investigation you will notice a small variation, such as two letters transposed.

THIS IS A SCAM.  Do not change any billing/invoicing information from an email request.  You should always call the company and verify the request is legitimate.

Victims in nearby parishes have reported receiving an email from what appears to be the Louisiana Sheriff’s Association (LSA) president, Sheriff Jason Ard.  The email asks the victims to participate in collecting gift cards to donate to veterans to help with the financial burdens of COVID.  The email then instructs the victim to reply to the email if they wish to participate.  DO NOT REPLY!  This is a scam, not a legitimate communications from the LSA.

Please be aware that the federal government will NOT ask you to confirm personal or banking information by email, phone or text.  They will also NOT demand a processing fee to expedite your stimulus payment.

These are scams, not legitimate communications from the U.S. Department of Treasury.  If you have received these messages, do not click on links in emails or text messages and do not provide your personal information.

Victims report receiving a phone call stating a warrant has been issued for their arrest due to their failure to appear for jury duty. The caller, who claims to be a deputy with the Calcasieu Parish Sheriff’s Office Warrants division, instructs the victim to provide a prepaid card to void the warrant and avoid arrest.

CPSO Vice detectives received information regarding another scam to extort money from victims in the name of U.S. Immigration and Customs Enforcement (ICE) Cyber Crimes Center.

This scam is believed to be connected to a virus that is automatically installed on the victims’ computer after opening a file or attachment in an email, or simply clicking on a compromised website. Once installed, the user’s computer immediately locks and a bogus message appears on the screen stating the computer has been associated with child pornography sites or other illegal online activity. To unlock their computer and to avoid other legal consequences, the user are required to pay a fine using a prepaid money card service.

This is a scam, not a legitimate communication from ICE. If you have received this message, do not pay any money or provide any personal information.

Several complaints have been received regarding businesses that have been contacted by fraudulent email accounts appearing to be from the Federal Bureau of Investigation (FBI). The email advises, following an investigation using the FBI Intelligence Monitoring Network System, it was discovered the user has been scammed and has been approved to receive approximately $800,000 in compensation.

The users are instructed to pay $2,500 worth of required fees, which include deposit and cashier’s check conversion fees, via wire transfer or prepaid money card, in order to receive their compensation.

Anyone receiving such emails should not respond to the email in anyway, but report the incident to the FBI immediately online at www.ic3.gov.

Victims report receiving a phone call from someone who claims to be a family member.  The suspect begins to tell them they are in trouble or have been arrested and need money wired to them immediately.

Victims report receiving a phone call from someone who claims to be from Equifax calling to verify your account information.

Victims report receiving a request on social media sites or apps such as Facebook or WhatsApp from an individual they do not know who will begin to message them.  The suspect will continue to converse with the victim over a period of days, while speaking lovingly and affectionately and will use endearing terms such as “soul mate.”  Victims then report the suspect will ask them to perform an act such as sending nude photographs or performing sexual acts live on a social media app.  Once the act is complete the suspects states they are underage and what the victim has done is criminal behavior.  The suspect will then threaten to go to the police or the victim’s family and friends if they do not send money to them in the form of a MoneyGram to the Bank of West Africa.  This is a scam!

Here are some tips to be on the lookout for to avoid becoming a victim of this scam:

·         The suspects are reported to make a common profile using fake photographs and information to create the appearance that they are American.

·         The suspect’s profile will have indicators they are not from this area such as an abundance of friends with African surnames.  They will also “like” many groups from the areas of Nigeria, Ghana, and the Ivory Coast, as well as other African nations.

·         The suspects will have difficulties typing properly in the English language.  Pay attention to their verbiage.

Scammers may contact you impersonating an established individual or company and tell you that they have noticed suspicious activity, such as money being sent from your account to another account. They’ll ask you to send money to yourself using your mobile banking app, or via an online wire transfer to “reverse” the payment

Scammers will try to pose as an employee with a bank and ask you to provide your personal information or even transfer money by phone, text or email.

CPSO Avoiding Scams - A Guide to Recognize & Protect Yourself from Fraud 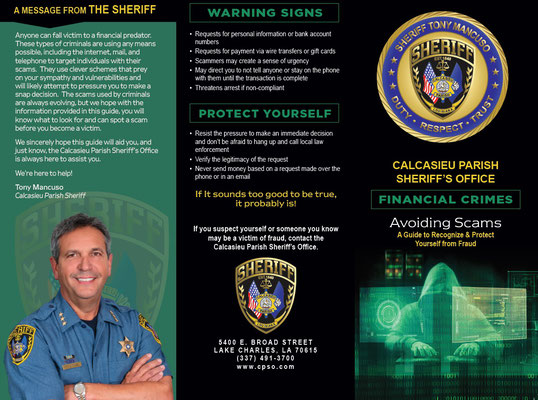 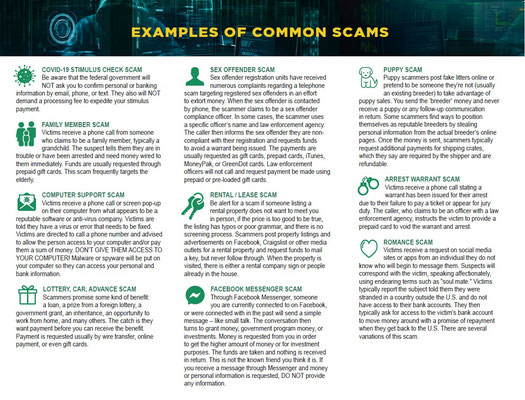 If anyone believes they may have been victimized by a scammer, please contact the Calcasieu Parish Sheriff’s Office at 491-3605