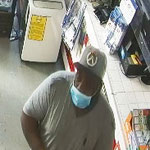 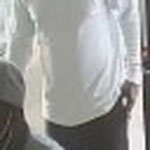 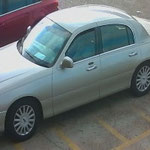 The Calcasieu Parish Sheriff’s Office is investigating a hit and run that occurred on Monday, September 19 at approximately 8:00 a.m. at a convenience store on Highway 12 in Starks.

During the initial investigation detectives learned a car pulled into a parking spot and continued driving, hitting the building.  It was learned the driver and passenger then entered the store and spoke with an employee who advised them to wait for the owner to arrive.  The suspects then exited the store and fled the scene in the car.

The car is described as a gold or tan Lincoln Town Car.  Detectives also received information in reference to the suspects possibly living in the DeRidder area.

Calcasieu Parish Sheriff’s Office detectives attempted to identify the suspects but have been unsuccessful and are asking anyone who can identify the car or the men seen in these photographs to contact the lead investigators, Lt. Bryan Guth or Sr. Cpl. Casey Steech at 491-3846 and reference complaint number 20-134889.